I thought when purchased Rolling Stone, it was going to be about the music industry completely. Much to my surprise I found GREAT articles and writing about timely issues. They have journalist that cover the world we are facing today. I enjoy their articles more than I enjoy some of the other magazines that are supposed to be about the news. The article about the General that disagreed with the way we are fighting in the Persian Gulf area. Then they followed up with a fantastic article on BP. I find myself looking forward to the next issue to sea what they are writing about. Along with this cutting edge writing, I do find great stories about the music industry and other such items.
I will try to never let my subscription expire.

Rolling Stone Magazine has consistently kept my interest with its always compelling storys and reviews on music,movies,politics and pop culture. A must read for anyone interested in the state of the world.

I find it entertaining...

Then the people complaining about the auto-renewal - hey readers, it's clearly marked that this *includes* an auto-renewal. If you are buying a magazine, I would think you can actually read?

Then there are those bemoaning how the magazine has changed, is too political, is not writing enough about music, has too many teeny-boppers on the cover...blah blah blah.

Rolling Stone was always about change. It was always political. It never *only* wrote about music. As for the *Tiger Beat* comments - David Cassidy was featured nude on the cover decades ago. Yes, THAT David Cassidy from the Partridge Family.

I remember when MTV actually played *Music Videos*, I remember when gas was 50 cents a gallon, and I remember when I had David Cassidy posters on my wall. I've changed, the world has changed and I would be surprised if Rolling Stone hadn't changed. What has NOT changed is that I know a bargain when I see it.

ONE Dollar for 6-months of Rolling Stone? Sign me up.

I am grateful that Rolling Stone exists

Sui Generis. One of a kind. There's no other magazine like it. During the dark night of the Bush/Cheney Era, there were only a handful of major mainstream publications that challenged Republican "wisdom" -- The Atlantic, Vanity Fair, Harper's, The New Yorker, and ... Rolling Stone. In other words, if you didn't believe there were WMD, only these 5 publications would tell you otherwise. And they were right.

On top of this prestige, you get great writers (Matt Taibbi, Peter Travers), and great music & cultural coverage across the generational spectrum. Many of their interviews have no contemporary equal except occasionally Playboy or Vanity Fair.

I will always be a subscriber to Rolling Stone.

I'm not that big a new music fan, I'm 62, but I like the articles on just about anything.Good political article every month and nice reviews of movies, etc. Still a quality magazine.

Being a former subscriber and having let my subscription lapse after moving from New England to SW Florida 17 years ago, I had forgotten just how much I missed the reviews and news in each issue. It's good to back in the know.

What's to say? If you want a magazine that prints not only music reviews and articles, it has incredible writers that tell everyday events the way they should be told. Writers are not afraid to "tell it like it is" and I for one applaud them for doing it.Wanna be truly informed? It's your choice.

Solid news on culture, as always

I'm a 30-year old guy from urban America and have subscribed to rolling stone for about 5 years. I have a wide taste in music, movies, and culture and Rolling Stone does an excellent job of exposing new and cutting edge culture as well as relevant political issues.

The RS music and movie coverage is vast and well written. I've discovered some great new artists and movies that I would otherwise not have tried thanks to the RS reviews.

Their political coverage, though drastically liberal and biased, can be both very informative and enjoyable to read. The infamous article trashing Goldman Sachs, which compared the bank to a "vampire squid" sucking the life out of the public, was a model example of their entertaining and educating articles.

If you want the latest in music, movies, politics, and culture you can't go wrong with Rolling Stone magazine. My only complaint (if you can call it a complaint) is that it comes so frequently (weekly) i sometimes don't have time to read one issue before the next one arrives.

Rolling Stone Blows This Newcomer Away

Not the hugest music fan. Never really pay attention to music as it happens, I tend to enjoy it more passively.

That being said, I took the offer for a 6 dollar one year subscription thinking I would see how the mag was.

Turns out my first issue was the one in which Gen. McCrystal basically did some Obama bashing. This article made international headlines
and cost McCrystal his job. YES ROLLING STONE!

Since then I have been absolutely, positively, blown away by their stories. They have covered the gulf spill wonderfully calling out all
the right major players.

I am really enjoying the articles this mag puts out.

On a second note, I am now more into musicians and bands and their stories, than I am the music. The writing is that engaging!

I was surprised by how broad this magazine is. Yes it covers music, and fortunately all types, not just the current crop of one-hit-wonders. But it covers important issues of the day like the BP Gulf oil disaster and how the government is mishandling oil management. It's not afraid to cover relevant issues like General McChrystal's view of the White House and his abrasive personality. 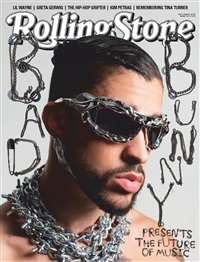