This is my favorite magazine about the mind, particularly with respect to consciousness. It's like a meeting of the minds (no pun intended) between spiritual phenomena and scientific discovery. The articles are seriously interesting and always have a new twist. I do wish it was printed more frequently however it is worth the wait for each issue.

This is one of my favorite periodicals that I look forward to reading when issued. There are always interesting facts, articles, and stories related to the human mind. The range of topics that each issue covers is very wide and always leads to further thought and research during my free time.

This is the first time I have subscribed to this magazine. I really like the article topics but wish that there was more data included to back the articles.

Could be much better

I've been subscribing to SciAm Mind for about a year now and have been reading it at the bookstore for a couple of years. I'm a layperson, no medical training or professional background in dealing with these topics, I just have a personal interest.

While I enjoy a good bit of the magazine, I typically find myself frustrated at how it seems as though they only have a few people submitting articles. Unfortunately I don't have a copy on hand, but there's one guy (?) with a name that's about a mile long, and by the time I've finished the magazine, I'm sick of seeing his name and reading his often less-than-thrilling diatribes.

I'll likely continue subscribing to SciAm Mind because I do feel like I get something out of it, but Psychology Today is definitely my preferred of the two.

Not Necessarily for Neuroscientists

Each issue of this magazine covers very interesting topics in psychology and neuroscience, though it is by no means "Science". I expected the depth of the articles to be along the lines of Scientific American, its parent publication, and I am occasionally disappointed by the superficiality of some of the content.

Nonetheless, I find this magazine to address fascinating questions concerning the mind and to be very accessible if you do not have a background in the sciences. With that said though, if you are a neuroscientist, you may find "Nature Neuroscience" to be more satisfying.

If "Brain Stain" in the October 2007 issue is any example, then the "Scientific American Mind" should consider hiring someone to fact-check these articles, and perhaps even require some documentation from its authors.

For example, the authors say that research by experimental psychologist Elizabeth Loftus, PhD, and Jacqueline Pickrell, then a research assistant, showed that "29 percent of the [24] subjects `remembered' the false the event." However, Loftus and Pickrell actually reported on p. 723 of their article: "Of the 24 total, 19 subjects correctly chose the getting-lost memory as the false one, while the remaining five incorrectly thought that one of the true events was the false one." Not a big difference, certainly. But shouldn't data be reported accurately? Loftus and Pickrell's 1995 study is online at Loftus's UC Irvine website.

As for the 1996 report of the Crime Victims Compensation Program in Washington the authors mention. I attended that final meeting. The authors fail to mention how that data was gathered. Between 1991 and 1995, 670 repressed memory claims were filed with the CVC program. 325 were allowed. A nurse consultant reviewed 183 of these claims. 30 were "randomly" selected for this report. Does the 1996 report accurately represent the entire group? We don't know.

Finally, don't Scientific American Mind readers deserve documentation? The account of Sheri J. Storm's case is anecdotal. Should we question this account? Especially given the fact that 10 years ago, the plaintiffs in at least two of these false memory lawsuits that settled--one against Bennett Braun, MD, of Chicago, another against Judith Peterson, PhD, of Houston--were later found to have testified in (1) a deposition on January 17, 1997, and in (2) US v. Peterson in September 1998, that no false memories were implanted.

Should be called "Scientific American Brain"

This is less about the "mind" and more about the brain, as far as I'm concerned. There is lots of biological science (some of it questionable) and a lot less psychology. It seems very focused on finding biological causes for emotional or psychological states which I feel is narrow and only half the story.

Scientific American Mind doesn't live up to its title!

Scientific American Mind doesn't live up to its title!

The recent article "Brain Stain" makes many claims which don't begin to live up to the standard of "scientific." Instead the article follow the usual pattern of the deniers of traumatic results from childhood abuse. It focuses on the long discredited argument that it is not possible to repress memories of trauma, and without substantiating this claim, uses it to paint various therapeutic treatments for childhood sexual abuse as bogus and harmful. To do this, the article typically states one side of an argument as uncontested fact, and mentions selective studies they claim support this fact.

A major unscientific technique the article uses is to cite only a few, one-sided studies, draw a biases interpretation and seal the deal by not citing searchable sources.

As an example, the authors claim there have been no studies proving repression (and by default recovered memories) of traumatic abuse. In fact there have such studies, including ones that demonstrated that some young children with medically documented sexual abuse, later did not recall the events. Some who did later recall the events, had long periods of their life when the did not member the events.

Dr. Freyd herself recalled, independent of therapy, memories of early sexual abuse that she had forgotten until she was an adult. Of course the studies she lists are more scientifically persuasive than one person's report, but she is not just another anecdotal claimant. In fact she is the daughter of the two founders of The False Memory Syndrom Foundation, the main organization behind much of the denial in the US of repression, repressed memories and ability of some people to later recall early, forgotten trauma. Dr. Freyd's story is very revealing. She did not take her parents to court, but after her mother realized her daughter believed her father had been abusive, the mother founded FMSF and has been a fierce opponent of efforts to support and if possible validate claims of early abuse, later realized.

Simply put, it is not scientific to make one sided claims, not support them with a balanced selection of the data and then draw unfounded claims. More importantly, it is also not humane to use this kind of false science to malign both the efforts to uncover abuse and where possible to treat it's devastating results.

The readers of Scientific American Mind are being misused in the case of this shoddy article. 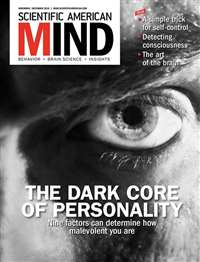