This magazine is my favorite sailing magazine. I race sailboats constantly and Sailing World really keeps me up to date. It has articles on everything I need to know for racing. There are sections on technology, news, strategy, boat handling, and any big races (America's Cup, Volvo around the world race, ect.).
The articles are really good. I especially like the ones that help in racing. These articles contain boat handling, rules, and strategy. These articles are in-depth and are really helpful. They are usually written by top sailors. They are easy to understand and are made to appeal to all racers. The other good articles are the tech-review ones. These articles show all levels of gear. They have reviews on the gear, prices, ect. Some of the better sailors also tell about what gear they like to use.
Last month, I got an entire issue about the America's Cup. It came out at about the same time the Luis Vitton Cup started. This issue is great if you’re planning on watching the cup races. It had all of the normal sections but they were all about the cup. I really like this issue but people less into the cup would probably not. It would get very boring fast. This is an example of how the magazine really caters to racers.
Overall im very impressed with the magazine overall. Information is very useful and it is written very well. The magazine is a must for all competitive racers. Note: The same company that puts out sailing world makes a magazine called Cruising World that is for people who cruise boats.

P.S For a good laugh flip to the last page of the magazine. That's where Dr. Crash is. People send in funny letters and send in photos. Dr. Crash gives "advice" to these people.

Performance sailing at your doorstep

Impressive for the world class sailors that monthly write guest columns and for its clear and concise writing, 'Sailing World' consistently delivers information that keeps one up to date on the techniques, boats, equipment, events and personalities that encompasses the world of performance sailing. The articles are written in a manner that teach even an interested novice to sail better and more experienced sailors can still find nuggets of new information. Even after receiving this magazine for thirty plus years, and at least 4 titles, I still anxiously await its arrival (almost) each month and read it cover to cover; never failing to learn from each issue.

When the "Sailing World" editors make the claim, the "authority on performance sailing", they aren't kidding- its all racing, all the time. Sailing World's entire emphasis is on speed at sea (under sail of course :-) ). No how to moonlight cruise tropical waters here, get Cruising World for that- Sailing World is about racing tactics, racing seamanship, racing safety, regatta and race results, racing hardware, sails, racing boats, and race skippers.

If you aren't REALLY interested in sailboat racing, don't get this magazine. But if you are out sailing back to the marina, meet up with another sailboat going in the same direction as you, then get this urge to get home first, then "Sailing World" is the magazine for you.

Sailing World is a beautiful, well-written magazine! It comes with gorgeous pictures and coverage of international, college and local races and regattas, as well as contains many technique articles complete with pictures and diagrams to reinforce or introduce solid techniques to a beginning or even experienced sailor. When I can't get out to sail, I turn to Sailing World to bring the world of sailing to me! It always has excellent coverage of America's Cup as well as other local regattas in California, where I live. It is timely and the information is always very current and holds the latest news in tech issues, new products on the market and current standings. Excellent coverage and exclusive articles that I haven't seen anywhere else. This publication helps you concentrate on being the best sailor that you can, whether you're a beginner or a seasoned pro. I recently took up sailing a few years ago and this has been like my sailing bible!

THE ESSENTIAL GUIDE TO SAILING!...

If you only have time or space for one sailing magazine, this would be it! From the professional to the enthusiastic beginner, Sailing World is a must for the sailing afficianado. Where else can you find a balanced, well-written magazine that not only covers collegiate sailing, new products, America's Cup, international sailing, new boats, expert techniques, and intelligent editorials. I have found that other sailing publications try to be "too much" and they lose their focus in either large and countless advertisements to pay for their large format, or juxtapose a beginner's article against a highly technical article for experts, leaving the reader confused. This is the only sailing magazine I subscribe to and will continue to. You must have this magazine!

A must for any Sailor

Sailing World Magazine keeps you in touch with the pulse of sailing. It covers all the racing, from collegiate to the Americas Cup. Features articles every month on the latest in the racing rules, major events, how to make your boat go as fast as possible and new noteworthy boats. If you are passionate about sailing, you'll LOVE this magazine.

A Magaizine Worth its Ballast.

I get three "boating" magazines: Sailing, Sail and Soundings (a general boating magazine - highly recommended). Each one has a special place on my coffee table.

The strength of this magazine is, first and foremost, the sections titled: `Perry on Design' and the `Used Boat Notebook' (and its accompanying side bar - `Value Guide'). `Perry on Design' covers briefly the designs of the new offering hitting the market. `Used Boat Notebook' is the "Car & Driver" review for used boats: much more thorough than `Perry'. This outstanding section covers: Impressions, Construction, What to Look for, On Deck, Down Below, Engine, Under Way and a succinct conclusion that raps it up This section alone is the main reason I get this magazine. Other reasons are the magazine's beautiful color photos and a section called `Boat Doctor', information on technique and safety.

If you are a sailor, serious or a wannabe, you can't go wrong with "Sailing". Strongly recommended.

OK but not great

I find this magazine hit or miss. Some months there are helpful and interesting articles other months nothing much at all. There are too many advertisements and reviews of products and vessels but then is is probably what brings in the cash, right.

I subscribed to Sailing World for two years. After 6 months I noticed that I only had 6 months left. After 5 calls where I was told I did have another year coming, now the tell me that a new owner has purchased the magazine and they owe me nothing. 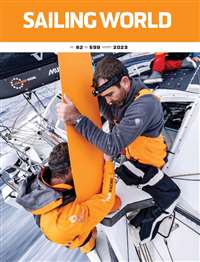