If You Only Read One Periodical This is It

A playground for the mind. Covers a wide range of subjects. Each review is a full essay on the subject of the book. Many reviews compare and contrast several recently published books on the same subject. Learned and sophisticated yet fully accessible. An on-going liberal arts education and the easiest way I know to keep the eclectic learning that a liberal arts education aspires to.

THE NEW YORK REVIEW OF BOOKS is published 20 times a year, biweekly except in January, July, August and September. It is a respected publication which is devoted mostly to reviews of current books and an occasional movie. It also contains articles of social or political interest. The Letters section is usually brief with little waste.

Contributors to a recent edition included Mark Danner, Sister Helen Prejean and Daniel Mendelsohn. Reviews covered such diverse items as a collection of short stories by Graham Greene and two books about the actress Anna May Wong in addition to ALEXANDER, a film directed by Oliver Stone.

THE NEW YORK REVIEW OF BOOKS consistently offers provocative writing in a highly readable style. It definitely deserves its reputation for excellence.

NYRB features long, in-depth articles about recent books and events. The "reviews" frequently take the book under discussion as a starting point for a wide-ranging essay which then becomes a work in its own right. Indeed, I've seen articles in NYRB referred to in academic papers. Don't fear that NYRB will bore you, however. I've often found a NYRB article to be a great introduction to an area of thought or literature previously unknown to me.

The only negative is a rather tedious Michael-Mooreish political stance. I have no objection to seeing Bush bashed, but wish that NYRB could do so in a more creative and less repetitive manner. Maybe once in a while we could hear from someone who actually likes the man?

Nevertheless I find NYRB an indispensable periodical. I find it a great complement to The Economist, which features a more pro-business and pro-free trade economic stance and wider, but less deep, coverage of the world.

I love the New York Review. While I do not agree politically with many of the articles, that's a small price to pay for the overwhelming number of pieces written, as an earlier reviewer said, by experts who really care about what they're writing about. America needs to celebrate its public intellectuals and, if most of them don't like Bush (another reviewer's complaint), well, it's tough to be open minded and smart, like most of the writers in the Review, and also be a Bush supporter. I mean, this is the Bush administration, which has shown about as much respect for the truth as a cat for a wounded sparrow. Which is obviously antithetical to the mission of (most of) the Review writers: to really try to figure stuff out.

"The Best Magazine In The World"

I have heard this magazine/periodical described as "the best magazine in the world" and I have to agree with this statement. In fact, this may sound ridiculous, but it is so good that I can't even subscribe to it because I end of spending so much time reading it that I neglect my other work and duties. A sad comment on our increasingly hectic/modern lives (or at least mine).
I keep telling myself I will reward myself with a new subscription. I guess I need to do something to earn it:-)

This was the easiest and least expensive way to purchase a subscription to NY Review of Books. It made a great gift and the sub started arriving very quickly. 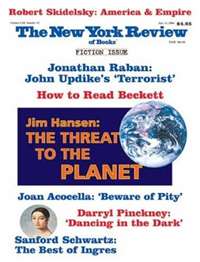