A Must Have Mag

Paparider reads this Mag cover to cover every month (then I do). Then they sit around in the bathroom for "lite" reading till I get weary of them and file them away. A must have read for all bike enthusisits.

Motorcyclist is a mainstay in the motorcycle magazine world, a place where cycle novices like this reviewer can begin to get a monthly diet of news, mechanics, advertisements, reviews, and cycle talk.

The format is busy, with very narrow margins. Think the opposite of those luxury goods magazines that seem bent on calming your mind. MOTORCYCLIST wants to rev it up, or better yet, place it in a helmet and roughly equidistant between the two ends of a handlebar.

The magazine pays fair attention to racing and racing cycles, then moves on to street bikes and eventually to the cruisers that most interest this middle-aged fat boy of a reviewer. The current issue in front of me has an Asian touch, with a series of articles headlined provocatively as 'Korean bikes: do they suck?' and an article entitled 'Riding the Ho Chi Minh Trail.'

'Makes one recall thirty years ago, when we couldn't imagine that a company named Honda could actually squeak out a running car.

Motorcyclists in this country, where riding a bike is a choice rather than a transportation necessity, tend to be passionate about their ride. So expect some flaming in the letters and reviews sections.

MOTORCYCLIST is a staple: the literary Hamburger Helper of a cyclist's regular reading.

When Mitch Boehm left, and Brian Catterson took top spot, this magazine went into a tailspin. Despite several retorts that it didn't turn into a Ducati infomercial, the evidence is overwhelming to the contrary. The writing went downhill, the perspective of what motorcycling means to a wider audience, and the circumspect approach to all owners flew out the window. I used to tell people Motorcyclist was the best. Not anymore. Do yourself a favor and get Cycle World. The writing is better, the experts are more credible, the articles are more intelligent, and they cover ALL the bikes. Rider is improving with each issue, having also surpassed Motorcyclist in quality some time ago.

Got a subscription for one free year when I subscribed to another magazine. If you're into sportbikes it's fine. If you're a cruiser rider you're all but forgotten. 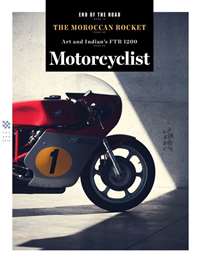