Back to nature for newbies and hippies alike

My first introduction to Mother Earth News was via a post on a message board overpopulated by fundie homesteaders. Since more than a few of them are using outhouses (and computers, what a mix), I suspected they had alternative uses for the magazine. I wouldn't have paid much attention, except for someone's mention of an article on electric power through the useage of wind generators. Since I live in a region where 20 mph winds are an every day thang, I had been doing some research on adding a backup power system that could keep my beer cold when all else failed.

I picked up my first issue, and was hooked. It's like back to the basics for everyone. Whether you're a city dweller looking to raise a few veggies in a square garden, a technology shunning, hippie throwback to the 60s, or just someone who would like to do things a little differently, and perhaps a little more ecologically sound, you're sure to find something of interest in Mother Earth News. I particularly liked an article about a couple who took a VW diesel bus and ran it on recycled cooking oil, touring the country to demonstrate how this could be done. It had me eyeballing a diesel tractor wondering if I could do it as well. Another issue featured a blueberry (or maybe it was blackberries) grower who got phenominal results from a particular strain. I set the mag aside so I could order some plants from him. Of course, I've lost the damn thing now, but it was a good article regardless!

They also have an extensive advertiser's index in the back, which doesn't sound so great, but if you are looking for things like wood burning stoves that offer old fashioned heat and ambiance along with modern efficiency, or alternative energy sources, etc, you'll find yourself typing in a lot of www trying to see all the sites they list. I think it's a bimonthly magazine, because I buy it at the grocery store and it seems like a new issue only appears every other month. I should just break down and get a subscription, because I really like this magazine.

Mother of all home magazines

I have been reading Mother Earth News for over 20 years now. I love it. You never know what you will find in there, but you do know that it will always be useful whether you are an urbanite or suburbanite. If you dream of running to the mountains someday to live "off the grid" the Mother has the info you need. Want to know about "grey watering" the garden, once again mother comes through.

I look forward to my copy and my trip to my dream home with every issue. I am not sure if I will go with straw bales, or cobb, or if I will ever get my dream house. But the information in Mother Earth News is always such that it makes you think. Think about our planet and how we need to take care of it and ourselves.

Even if you don't consider yourself an "earthy person" you will find something in M.E.N. to spark an interest. Get it, read it, subscribe. You won't be sorry.

The How to for the Homesteader

Do you want to learn how to create your own power to run the lights in your home. Mother Earth News can show you the way. How to build a windmill, or how to set up those solar panels, even how to build a water wheel.

Looking for ways to help your garden grown without the harsh chemicals of the comercial fertilizers. Mother earth news can show you how to set up several different kinds of composts.

Looking to meet up with people like you who just want to get back to the good ole' days. Mother Earth News has this for you as well.

They even have different types of houses you can build for yourself on your own land. Every thought of a straw house, let me tell you the three little pigs has nothing on Mother Earth News.

Want to find people who raise strange and interesting vegetables and trade seeds back and forth. There is a complete listing of people more then willing to trade what they have been able to come up with for some of your more interesting seeds.

This is a page turner for anyone just wanting to get back to the earth.. informative and interesting.. you can't ask for much more

Mother Earth News is in my opinion an excellent magazine for anyone who considers themselves to be a gardener, environmentalist, or entrepreneur. This magazine has information about recycling, building homes, building garden tools, solar energy, wind power, and basically anything that has to do with off-grid living. There is also information about gardening and plants. It is a source of information that is hard to find in the general media. The articles that are written not only are informative but they are timeless, I find myself keeping them for years and going back to them from time to time refresh my memory on things. I so enjoy this magazine that it I read it from cover to cover, no other magazine captivates my attention as Mother Earth News. To compare it with any other magazine would be unfair, I have tried other magazines like "Better Homes & Gardens", "Outdoor Life", "Horticulture", and others but no other gives such a good mix of information in a way that is not boring or repetitive. I would consider myself an "earth friendly" person and this magazine is such a magazine. It helps "earth friendly" people with the articles that help them stay on top of technology and at the same time hold on to the good things of the past.

A Great Resource Cover to Cover!

This is a great magazine, and an important one. Every issue is packed with no-nonsense, straight talking, useful information, information for better, more conscious living.

In our society, we're not taught how to do for ourselves anymore (we're taught how to make more money so we can get someone or something else to do it for us). It is so empowering to be supported on the path to independence and sustainability, Mother Earth News does this with its information resources and with its way of encouraging community, (you are not alone!).

I read every issue cover to cover (even the ads are good!). The articles are clear and full of information and advice on everything from building a log cabin, to properly seasoning a cast iron pan, to keeping deer out of your garden. They are also great about citing sources for you to get more in depth information about whatever the topic is.

Up until a couple of months ago I lived in the Bronx, I'd look forward to every issues arrival and I'd devour it on the subway to keep me connected to the real world. Even living in the city, there was much I could apply to improving my life. I was an infant in the 60's, when the "back to the land" movement started, but it is clearly still alive and well, and gaining momentum, I'm very grateful that "Mother" is still around!

If you want to know how to start a garden in your window box, or how to turn that junk chair into a masterpiece, then this magazine is just for you.
It is more then a gardening magazine but an information magazine.
I have been reading Mother for five years now and I am a devoted reader. The articles inside help me with my gardening needs, small business hints, and some of the best recipes I have tried out on my family.
The photography is excellent and beautiful.
Articles well written and a wide variation.
This is one of my favorite magazines and I recommend it for anyone wanting a healthier way of living.

This magazine is amazing. There is so much information on every page. I am new to organics, kind of, so I am still learning about everything. This magazine is great to have for reference and before you buy a house read it so you don't spend thousands on a regular house when you could build it so much cheaper with alternative methods- that are much prettier too.

This is the most comprehensive source of information on living in a self sufficient manner. They have a wonderful website as well that is chalked full of information. Mother Earth News is great for the experienced homesteader, or a younger person that would like to follow in their parents footsteps. Do not let this one get away. It is a great reminder of the simpler things in life. This should be a companion of yours.

Getting near the end of the first year of the subscription. Well worth the price and has not disappointed.

This magazine is for those people who wish to be less dependent on the less reliable than desired infrastructure of modern living. Chock full of information on how to use alternative fuel sources (such as bamboo), and how to live off a modest plot of land, this magazine has a lot of information in it for anyone who gardens, owns a cabin, or is interested in living on how our ancestors did a hundred years ago.
Each issue has a variety of different subjects in it. I have read many informative articles about the effective use of cover crops, how to build a low volume water purification system, and how to buy a plot of land in Mexico. Each issue is filled with little nuggets that can turn in the most bumbling city slicker into an experienced farm hand.

Sometimes, Mother Earth News holds contests, and by reading the biographies for the winners, you can tell a lot about the magazine's readership. The winner of a green building contest was a couple from Alaska who used the wood from a demolished fish processing plant to build their house - which is located on an island far into the arctic north. Mother Earth News is definitely about recycling and reusing, which is probably a wise idea considering the dwindling number of resources our planet has.

This is not a Martha Stewart magazine, and you will not find reviews of designer gardening gloves, or articles on chemical fertilizers and pesticides. With a subscription to this magazine, and a large enough chunk of land, you could live with out having to go to the store very often. From hints to raising goats to growing tomatoes and making your own clothes, this magazine explains it all.

The abundance of information is generally a good thing, but sometimes can be too much. You would probably not want to keep Mother Earth News around as a conversation starter (something it does not pretend to be) as, chances are, your guests would not have much to comment about. There is little in the way of humor in these pages, but this magazine is for learning anyway.

All in all, Mother Earth News is a very informative read. Even if you grew up on a farm, chances are you will still learn much from this magazine. However, for those looking for some humor or excitement, look elsewhere. 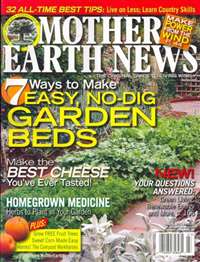