If you're into kiteboarding, this is the magazine for you. (And if not, why not?) This is pretty much the only serious mag devoted to the topic, and it's not bad. Like the sport itself, it's mostly made up of material from the surfing world; surfers who found something better found kiteboarding, and surfer-magazine writers who found something better write this mag. Lots of pictures, good editing, details, product info, new tricks, stunts, jargon, and general news on the subject. (If you don't know what kiteboarding is, find out and then go do it. It's incredible.)

The only serious problem I have with Kiteboarding Magazine is that it's not big enough, and that's because the sport itself is so young. It's quite similar to the magazine Surfer, or maybe Surfing, in layout and content, except of course it's about kiteboarding.

And yes I'm excited. I'm kind of a novice, but hey, it's a new sport; there are lots of novices. Kiteboarding magazine is about as up-to-date as you can get in that context.

Let me put it this way: if you're serious enough about kiteboarding to have shelled out the dough for your own gear (board, kite, harness, et cetera), easily a thousand bucks or more, then the info in this magazine is well worth fifteen or twenty bucks a year. I'd have paid thirty.

And oh yeah, for the search engines, the sport is also called kitesurfing and occasionally flysurfing, although flysurfing can sometimes also refer to skysurfing, which is essentially parachuting (from a plane) with a snowboard-like device strapped to your feet. 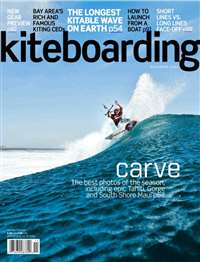