Solid, entertaining, informative for both guys and gals

I subscribed to Esquire for my husband, but find I read it much more than he does! I think the writers 'give great article', and it's not overly saturated with advertisements; while it has them - they are sharp and fresh.

At less than a dollar an issue, I am very pleased with this purchase.

Among My Favorite Magazines...

I recently "trimmed" my magazine purchases...down to two: Esquire and GQ. I put them both in a similar category: interesting articles, often irreverent...informative and entertaining. Of the half dozen magazines that were delivered to me in the past year, only these two were opened as soon as they arrived...the others would just lie there for days or more. I highly recommend Esquire...to any man with an interest in all things masculine.

One of the Best

Esquire is the only magazine I subscribe to. The pictures are nice, the articles are even better, covering a range of topics from fashion, women, politics, to current events, social issues, and more! It definitely tries to target a more sophisticated audience than its rival magazines, GQ & Details. Plus, you can never go wrong with Chuck Klosterman, whose almost-monthly contributions alone make this magazine a worthy subscription.

Esquire should be Required

I'm unsure why I had not found out about Esquire earlier. It's a great magazine all around. From fantastic articles about things you normally wouldn't see in stuff like People, or even Time. Also included are stories about some of the best actors and icons in American entertainment. They may not be responsible for world changes, but they're important in their own respect. Much like Playboy, some of the best fiction writen can be found between the covers of Esquire. This magazine has tidbits of information to help the normal man survive in the real world. It gives tips on how to make first impressions on the most improtant people you may encounter. Overall, it's a great magazine whether you're looking for helpful hints, interesting reads, great stories, or just plain fun.

I am a 41 year old single white female who subscribes to Esquire and wouldn't have it any other way. Seeing a new shiny Esquire in my mailbox is the highlight of my month. The articles are interesting, well-written, and diverse, and cover everything from the serious to the humorous to the artsy--fashion, food, women, travel, politics, the arts, history (especially its own), you name it. Esquire may like to toot its own horn more than other magazines, but it respects its 75 year history of making "a better man" and making the world better for them and their better halves. It is a substantial magazine and takes a good part of a month to get through. This is worth every penny, especially for a subscription. You could spend a year's subscription to Esquire in less than a month of Newsweek on the newsstand. Subscribe to Esquire--I don't care if you're male, female, young, old, democrat, republican, white, black, purple, orange, married, single, rich, poor--there is something for everyone. Make a better impression--read Esquire in public so people will think you care about yourself and the world around you, and follow its advice to show that you do.

This is a really well-written magazine, with very interesting articles and great information on style. I would recommend it for the articles alone though!

From a woman's POV-LOVE ESQUIRE

Funny, witty, relevant. And I am a female. I'm not sure my demographic was their intended target but I am always happy with the articles in Esquire. I read it cover to cover.

This is a magazine I never thought of picking up. Well since it was a great deal, I gave it a try. This is an excellent one not only for myself, but my husband. All articles are excellent for both men and women. Highly recommend!

So Much Better than Maxim!

This magazine is great and has a lot of good information and tips. It is more classy and sophisticated than the otherwise "trashy" Maxim magazine. Better yet, you will not be embarrassed to have Esquire on the table when family is over. And, the best part, this magazine is very enjoyable by all ages and both genders. Love it! The price is great!

I just got my first issue and it was a great read from cover to cover. Highly recommended. 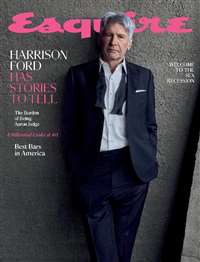