Cowboys & Indians Magazine is one of the most enjoyable reads in magazine publishing. Each issue I look forward to escaping to the various destinations, events, and reading the articles regarding art and works of artisans. The beautiful photography and layout of the magazine lets you dream about the places you would like to be and the people / personalities you would like to meet. I would recommend this magazine to anyone who enjoys any aspect of Western Lifestyle.

Hats off to a great Publication!!!

Anyone who appreciates great photography, whether it's landscapes, people, places, events, artwork, etc. and has any interest in a western lifestyle will love this magazine! And their interviews with topical people are great too. Russell Crowe was outstanding, and came out right around the Oscars!

The best of the West!

This magazine consistently has the best content you could ask for in a Western lifestyle magazine. I can't wait for each issue to arrive. Profiles of celebrities like Russell Crowe, Willie Nelson, and Sam Elliott are insightful and make me feel like a connection has been made. If you're a fan of the Western lifestyle, this magazine is a MUST!

THE Magazine of the West

Cowboys & Indians magazine is a beautiful magazine from start to finish. Interesting editorials, photography that will take your breath away, and new fashions, music & art - all of which truly express the culture of the West. Regardless of whether or not you're a "Cowboy" or an "Indian", this is one magazine subscription you must have - you will NOT be disappointed!

This magazine has a beautiful layout with a great combination of interesting articles and photography. It does include a lot advertising which only adds to the uniqueness of this magazine, because the advertising provides information about high quality items you can't just get around the corner.

I would definitely recommend this magazine for everyone. My friends also have subscriptions and they just love it.

What a gorgeous magazine that's much more than just a pretty face...With stars such as Russell Crowe, Sandra Bullock, Matt Damon and John Wayne gracing the covers, not to mention the entertaining articles and features, and the unique and beautiful jewelry, clothing, art, furniture, etc., it's no wonder I can't help but read each magazine time and time again. Wouldn't want anything else on my coffee table, and my guests love to read the magazine, too! Can't wait to read the latest Willie Nelson issue that just arrived in the mail!

Great for a Gift

I bought this as a present for my brother and he LOVES it! I was particularly impressed by the aticles and all of the travel destination advise.

GREAT! IF YOU'RE LOOKIN' FOR THE PSEUDO-WEST

I recall the first issue that I ever saw of COWBOYS & INDIANS magazine. Tom Selleck graced the cover, touting a story about Selleck and his newest western, CROSSFIRE TRAIL. The story was marvelous. Shortly after buying this copy from a newsstand I subscribed.

As I examined each ensuing issue of C&I one fact became quite clear to me: C&I was all about playing cowboys and Indians. Other than a few well-placed stories about some of the West's most notable characters, each magazine was packed with silly ads for supposedly acceptable western wear, "Society" pages that featured the faces of mostly unknown individuals who were on hand for the latest obscure "Western Awards" or some off-the-beaten-track wine tasting. In fact, just today I took the current issue of C&I and tore out all the advertisements and other nonsense that, in my thinking, really hasn't any business showing up in a magazine about the real West. To my dismay I excised nearly seventy pages or almost half of the magazine!

Admittedly, most of the cover stories have been great. But every once in a while the editors seemingly can't resist throwing in characters like Jewel, Hilary Duff, Arnold Schwarzenegger or Lance Armstrong, individuals who are, when it boils right down to it, about as truly Western as Caroline Kennedy! After all, it takes more than living in a western state (or even being the governor of one) to really be a westerner.

In the end it's all what I call the "Pseudo-West." As artificial as a wooden nickel.

I had hoped that, as the subtitle of the magazine asserts, COWBOYS & INDIANS was "The Premier Magazine of the West." Instead I was overwhelmed and disappointed at how the publishers and editors of this magazine have simply made the West a sort of cheap dodge. They seem to view it as more of a decorative theme or as a fashion style than as an actual lifestyle. The actual title of the magazine might well be "Let's-Play-Like-We're-Really-Western-Folks!"

Of course, there is likely a demographic that fits here, men and women who wouldn't recognize a real horse if it loped up and stepped on `em. But then, I'm talking about finding magazines that really reflect a Western lifestyle. If you agree with me you'd be much better served to pass on C&I and subscribe to WESTERN HORSEMAN. 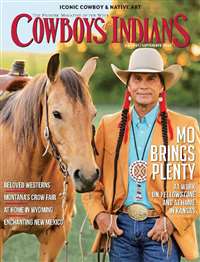