In the early 1960?s the BMW company faced a bleak future, full of doom, gloom, and obscurity. There had been no real innovation since the end of the Second World War, and they had little or no market penetration outside of their native Germany.

The BMW 2002 was the car that changed all this and was instrumental in establishing BMW as a leading force in the international car market.

I worked as a salesman for a BMW main dealer in High Wycombe, Bucks, in the early 1970?s, and it was here that I was introduced to the 2002, and here also that my ?love affair? with ?Beamers? began. The first company vehicle I was given for personal use was a 2002. It was an absolute ?flying machine? of a car, far ahead of anything else in its class, and with flair and style to spare.
The car had mechanical fuel injection, which generated some 130bhp. What this meant in layman?s terms was a rare sporting saloon, capable of speeds up to 120mph, and a 0 to 60mph time of under nine seconds. It burst onto a staid, stale U.K. motor market, breathing fire and brimstone over roads full of run of the mill and painfully slow British cars.

The ?ultimate? 2002 performance machine appeared in 1974. This was the awesome 2002 Turbo, which upped the power output to 170bhp. This pushed the car to its absolute limits, not only in terms of speed (150mph +) but to keep the car stable and safe on wet British roads. It could complete the 60mph dash in less than six seconds, which put it on a par with the likes of Ferrari and Porsche.
I have almost orgasmic memories of this model. I vividly recall the breath-taking exhilaration of once ?flooring? the 2002 Turbo on a steep upward gradient. The tyres quite literally smoked, such was the acceleration, as it leapt forward like a racehorse from the stalls.

The last 2002 rolled of the German production lines in 1976, to be replaced by the highly successful (but more staid) 3 Series, but this little gem of a car lives on in the memories of thousands of motorists.
Even to the present day, there are many 2002 enthusiast clubs, and good examples of the model can still be sought out and found.

FOOTNOTE I realise this opinion is not properly categorised, but I cannot find an "auto" category that fits.

For armchair fans of American cars, this is a wonderful magazine

For armchair fans of American cars, this is a wonderful magazine. The writers are knowledgable, and the photos are gorgeous. Good mix of historic photos and current restored cars. Impossible to overstate how much the first-class production, printing, and paper adds to the pleasure of reading this magazine.

The only "problem" is that there it's a bit pricy on the newsstand, and there isn't any way to get a deeply discounted subscription, since there's virtually no advertising.

Fortunately, the publishers maintain a generous policy of selling back issues for close to the current cover price (there's usually a detailed list of issues and subjects at the back of every issue). My recommendation to a prospective subscriber is to buy a copy from the newsstand and, if you enjoy it, use the money you would have spent on a subscription to order interesting back issues. (Remember, there's virtually no discount for a subscription, just the convenience of home delivery.)

One of the Very Best auto magazines!

I got hooked on Collectible Automobile magazine with the first issue that I picked up in a bookstore in 1984. I immediately subscribed, and have never let my subscription lapse in almost 17 years. The magazine has never disappointed me. The variety of topics covered and the excellent writing make every issue fresh and interesting. It is one of the best resources for collector car information I know of. Browsing through it during my teen years inspired me to become and auto writer myself, and today I am doing just that as a regular contributor to Car Collector magazine and as a published automotive book author. Hopefully, one day my name will also grace the pages of Collectible Automobile.

Don't let the subscription price scare you away. C.A. is worth every penny!

Recommended For: Anyone
Primary Reason for Buying: Articles 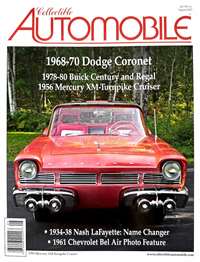