Calliope, a monthly magazine published during the school year aimed at upper elementary school students, tries to inspire a love of history in its readers. Each issue focuses on a particular element of world history, be it a region, a very famous person, or a common subject that applies across many world cultures.

Unlike many so-called world history magazines that focus primarily on western cultures, Calliope gives at least equal time to Indian, Chinese, Egyptian, and other Eastern cultures. It may actually err on the side of ignoring Western culture just a tad to devote more space to the less studied cultures. Many of the issues center on a specific individual but fan out with supporting information about his or her society and culture. This focal point personalizes the history, gives it a human interest that may be somewhat more compelling than the names and dates alone.

For instance, one issue focuses on Socrates. Through Socrates, we learn about the ancient Greeks and about basic principles of philosophy as drawn from Plato. The issue presents several biographical articles about Socrates including the events leading to the infamous hemlock incident, an article discussing the ancient Greek educational system, an article discussing why we still view the ancient Greek society as a golden age, information about ancient weapons and wars, and even a recipe for barley cakes eaten by soldiers during the Peloponnesian War. There's a play that showcases the Socratic method and several craft ideas based on ancient Greek ballots and mathematical toys.

Other recent issues have focused on Cleopatra, the history of writing, 16th century India, Assyria, Mexican independence, Shakespeare, and Zoroastroism. The theme of each issue is strictly adhered to (although sometimes loosely defined) in absolutely everything within the issue. If there's a play, it's on that topic. Craft ideas or interviews with professionals have some direct tie with the theme. These extras don't appear in every issue; some are strictly filled with informational articles. I'd guess that two of every three issues has a play and about the same number have an interview with someone working in a field related to the issue topic. I like having these extras but even without them Calliope is a fun read that also manages to impart a lot of information. Even when the theme is a topic I thought I knew well, I learn something new from the magazine.

Most of the articles are a few pages long but laden with pictures. There's enough information that I don't feel compelled to look everything up as soon as I finish reading but at the same time the articles are well edited to include only central information and keep a fairly breezy tone. The text is slightly larger than most magazines for ease of reading but not enlarged to the point where it feels like large print. Part of the Cobblestone group of magazines, Calliope has a similar feel to Appleseeds but is aimed at an older audience and is more focused on history. If you have a child who loves Appleseeds but is starting to outgrow it, consider Calliope as a possible replacement.

If I have one complaint about Calliope it's that they don't do cross-cultural issues often. One of my favorite issues was on the history of writing which discussed how many different cultures handled writing with a lot of comparison and a look at the evolution of writing. They did an excellent job of it and I'd like to see similar treatment of other common societal elements.

Calliope is an excellent magazine for upper elementary school students or for adults interested in an overview of world history. The topics covered are varied and not tied to the typical Western bias found in many history magazines. The coverage of each topic is excellent without being overwhelming and the writers and editors make a concerted effort to present their topics in fun ways that don't interfere with actually learning something. I definitely recommend this magazine.

When I was in elementary and junior high school, I thought learning about ancient civilizations was incredibly boring. But CALLIOPE presents information that actually makes world history interesting. The magazine's editors and writers make sure that readers understand how societies of long ago are making an impact in our lives right now. And that's worth learning about! The variety of topics covered (each issue has a theme) is outstanding--from the French Revolution to the dynasties of China to the Olympic games, just to name a few. The stories and activities are engaging. The photos and illustrations are top-notch. Only criticism I have--I wish CALLIOPE would come out 12 times a year instead of nine!

Calliope is a great resource for budding history buffs and teachers alike; each theme-based issue explores a topic in-depth, providing the reader with all sorts of fascinating information. Non-fiction articles, activities, and maps help explain some of the most interesting topics in world history. (Ancient Rome, Ramesses the Great, Genghis Kahn, and the Greek Olympics are just some of the recent and upcoming themes.) Calliope is geared towards kids 9 and up; however, some of the articles would be better suited for the 11 and up set (at times, the writing style seems more middle school than elementary school appropriate). Even so, bright and ambitious 9 year olds probably wouldn't have too hard a time unpacking the articles in Calliope. Each issue includes several hands-on activities, as well as word puzzles, riddles, and mazes. In all, Calliope is a fantastic magazine that will keep kids reading month after month.

I ordered these magazines for my daughters and they really love them. They are worth the expense. A nice fit for reading during breakfast or a snack. The magazines explore topics that are not emphasized in our school curriculum. Bravo! 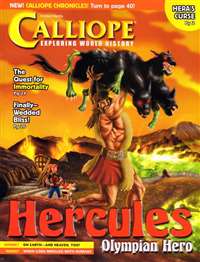